In October, during Eid, a bunch of us took a break away from school to venture to towns outside the city.  We traveled by bus to Meroe and Al Sabalouga.  Meroe is home to the Nubian pyramids, some of the oldest pyramids in the world.

Nubian pyramids are pyramids that were built by the rulers of the ancient Kushite kingdoms. Prior to the Kushites building these pyramids, there had been no pyramid construction in Egypt and the Nile Valley for more than 500 years. 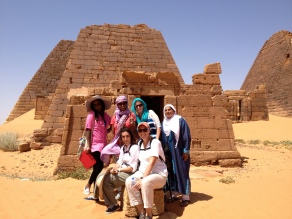 Some of the “group” that traveled to Meroe

Some of the pyramids of Meroe

The area of the Nile valley known as Nubia, which lies within present day Sudan, was home to three Kushite kingdoms during antiquity. The first had its capital at Kerma (2600–1520 BC). The second was centered on Napata (1000–300 BC). Finally, the last kingdom was centered on Meroë (300 BC–AD 300).  It was an amazing trip.  We were awed by the sheer number of pyramids on this site.  It was a hike across the desert…to enter the pyramids.  This was the first time since coming that I had seen the desert and felt like I was really in Africa!  Living in downtown Khartoum makes it difficult to imagine that this is only an hour away!

The most extensive Nubian pyramid site is at Meroë, which is located between the fifth and sixth cataracts of the Nile, approximately one hundred kilometres north of Khartoum. During the Meroitic period, over forty queens and kings were buried there.

The physical proportions of Nubian pyramids differ markedly from the Egyptian edifices: they are built of stepped courses of horizontally positioned stone blocks and range from approximately six to thirty metres in height, but rise from fairly small foundation footprints that rarely exceed eight metres in width, resulting in tall, narrow structures inclined at approximately seventy degrees. Most also have offering temple structures abutting their base with unique Kushite characteristics. By comparison, Egyptian pyramids of similar height generally had foundation footprints that were at least five times larger and were inclined at angles of between forty and fifty degrees.

All of the pyramid tombs of Nubia were plundered in ancient times, but wall reliefs preserved in the tomb chapels reveal that their royal occupants were mummified, covered with jewellery and laid to rest in wooden mummy cases. At the time of their exploration by archaeologists in the nineteenth and twentieth centuries, some pyramids were found to contain the remains of bows, quivers of arrows, archers’ thumb rings, horse harnesses, wooden boxes, furniture, pottery, colored glass, metal vessels, and many other artifacts attesting to extensive Meroitic trade with Egypt and the Hellenistic world. 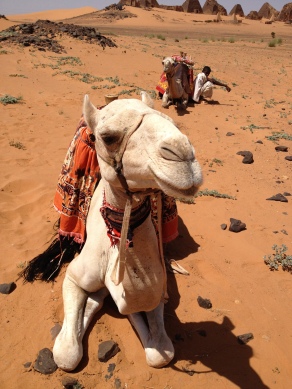 This guy’s name was Kauser–I rode him across the desert to see the pyramids that were on the far side!

hieroglyphics inside one of the pyramids

A pyramid excavated at Meroë included hundreds of heavy items such as large blocks adorned with rock art and 390 stones that comprised the pyramid. A cow buried complete with eye ointment was also unearthed in the area to be flooded by the Meroë Dam, as were musical rocks that were tapped to create a melodic sound.[3] 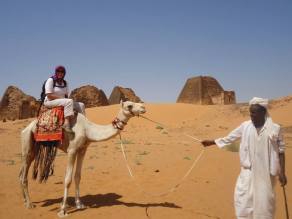 Me riding Kauser the camel!

It was incredibly dry and dusty that day so we had to cover our mouths, and it felt like one of the hottest days since we came to Sudan!

These little guys were selling souvenirs at the pyramids. They drove a hard bargain. I bought one of the pyramid replicas, it seemed to be made of some sort of sandy clay. I think I paid 10 pounds for it…that’s about 70 cents USD.

Buying our “tickets” at the entrance. They also had some “authentic” jewelry…hmmm

Since it was Eid, we saw lots of sheep being herded along side of the road. Built on the biblical tradition of Abraham and Isaac (lamb to the slaughter) these poor sheep don’t know what is awaiting them. Families will purchase them..for about 2500 SDG–some save for the whole year or more to do it–they have a ritual of slaughtering them and then the meat is grilled and served at the holiday meal.